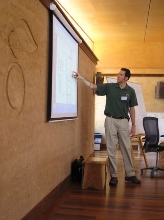 Smart Urban Villages has at its core a values-based approach to development that creates value for all project stakeholders: investors, employees, prospective residents, as well as the surrounding communities and environment. This is consistent with the emerging green economy, expressed in the great shift towards ethical and impact investing and Conscious Capitalism – where outstanding results are being achieved – by placing values front and centre and replicating natural processes to maximize efficiencies. For example:
A retrospective fifteen year analysis of eighteen publicly listed companies (documented by the team behind the 'Firms of Endearment' book) has shown that companies operating along the lines of the principles espoused by the Conscious Capitalism movement – outperformed the S&P500 by a factor of fourteen(i).

"From retail to finance and industries in between, the organizations who recognize that doing good is good business are becoming the ultimate value creators. They're changing their culture and generating every form of value that matters: emotional, experiential, social, and financial. And they're doing it for all their stakeholders. Not because it's simply politically correct, because it's the only path to long-term competitive advantage." (ref)

You can convert everything you see to a format you find convenient. Give it a try!

Smart Urban Villages / A Values-Based Enterprise is also available as